Browse: Home   /   Victor Madrigal-Borloz: “We can all recognize ourselves in those stories” / “Wir können uns alle in diesen Geschichten wiedererkennen”

The 41st UN Human Rights Council held in Geneva from 24 June to 12 July 2019 will decide on the renewal of the mandate of the UN Independent Expert on the Protection against Violence and Discrimination based on Sexual Orientation and Gender Identity (SOGI). The mandate was created in 2016 very narrowly with a majority of only five votes and its renewal is at stake. Caroline Ausserer spoke with the current mandate holder, Victor Madrigal-Borloz.

On 1 January 2018 you took on your role as the UN Independent Expert on the Protection against Violence and Discrimination based on Sexual Orientation and Gender Identity (SOGI) for a three-year period starting after your predecessor Professor Vitit Muntarbhorn requested to end his mandate due to personal reasons. If you look back at the past 1,5 years, what would you say were your major achievements or successes, what were your major challenges?

The mandate was created in the expectation it would be as controversial in its performance as it was in its creation. Both, Professor Muntarbhorn and myself, we have been very focussed in creating a practice and a body of costume within the mandate that assures states that this is not a mandate that is testing boundaries but that believes in creating critical mass around the idea that there is a very urgent task of addressing violence and discrimination based on sexual orientation and gender identity.

What exactly were your major challenges and achievements?

For the achievements it’s about the way that the mandate has performed in a way that its faithful to the conditions under which it was created. And the major challenges are the closed doors. I am worried about closed doors because I do not see their sense and I think there is an intentionality in actually ensuring that we cannot have a dialogue. Second, I am very worried about spaces for civil society. I always say, borrowing an expression from Cynthia Rothschild, civil spaces are not shrinking, they are actively being shrunk. There is an intentionality in the elimination of spaces for civil society, in the way resources are flowing in a more limited way, and in the way more and more resources are attached to other types of objectives rather than the elimination of violence and discrimination. The preservation of that space is something that I would consider a huge imperative for states.

“The most important thing that the mandate holder needs to do is to realize that there is a universe of states, international organisations, civil society, NGOs and HRIs that are working on these issues. My question is always first and foremost ‘what is it that nobody else can do?”

During the 41st Human Rights Council being hold at the moment here in Geneva the renewal of the mandate will be decided. Since the creation of the mandate was only passed by a very narrow margin vote (see my article of 2016), the extension of the mandate is now at stake. What are your predictions of the upcoming voting?

I do not have any predictions. I have been very vocal to the effect that I do not involve myself as the mandate holder in the politics of the renewal of the mandate. I believe that that is a political dialogue that pertains to the political actors, states and civil society. The only element, that I can advise decision makers is clearly in three years the situation that was proven to exist three years ago, has not been solved, which is the only situation in which I would imagine that a non-continuation of the mandate could be foreseen. But again, it’s something that pertains very much to states and civil society in their political dialogue.

For the establishment of the mandate in 2016 the civil society was crucial. The resolution had received overwhelming support from 628 NGOs from 151 countries. What is the role of civil society in the process of implementation and of renewal of the mandate?

What is very clear is that civil society has been filling gaps left by the state in the work concerning violence and discrimination. If you look at vast parts of the world where states have refused or have been negligent in collecting data, all the data is coming from civil society. Therefore, a huge pair of gratitude is owed to all civil society organisations that are complementing the work of the state in a situation where states need to redouble their efforts to ensure social inclusion.

How important is it that civil society engages and pushes for the renewal of the mandate?

I would like for civil society today to evaluate whether their expectations have been met, whether this is what they were imagining would exist as a vision. If the mandate is relevant for people on an everyday basis, then I would imagine civil society to work hard for its renewal. If the mandate has failed to its call, then I would imagine that civil society would not place too much of a priority. I believe that what we are seeing in terms of campaigns to renew the mandate seems to be providing evidence that this is the case but to me it would be important that we undertake that evaluation together, also for the next 18 months, if the mandate is renewed.

The mandate shall do so many things: report to the Human Rights Council and the General Assembly, engage into constructive dialogue with states and other relevant stakeholders, identify best practice etc. Besides doing all that, what is the role of the mandate holder? What are your focal points, your does and don’ts? What did you add to the mandate?

The most important thing that the mandate holder needs to do is to realize that there is a universe of states, international organisations, civil society, NGOs and HRIs that are working on these issues. My question is always first and foremost ‘what is it that nobody else can do?’ And that is that I should choose as number one. Only I as a mandate holder, as custodian temporarily of this mandate, only I have the task, given by the community of nations, to report to the UN. The most important don’t is: I don’t try to replicate what anybody else is doing and I want and try to understand what everybody else is doing so I can connect to it. Because to me connectivity is essential in that respect.

“(D)ata did not exist in relation to the killings of trans women and that’s because they typically were registered as men in the databases, so their gender identity was not recognized.”

Data is a vehicle and an expression that is a value in a way that good policy and good jurisprudence should be made on an evidence base. You need to actually know what your knowledge base is in order to take good decisions. It is a proposal to abandon decision making by preconception or prejudice, which is the way that I believe decision making has been taken in relation to LGBT issues historically. It is very often that policy makers will make reference to things that are considered truths by popular culture such as the association of homosexuality and paedophilia, of which there is absolutely no evidence. Leaders and policy makers who say that LGBTI people don’t exist within their jurisdictions are speaking without any kind of evidence-base, they are speaking from prejudice and they demonstrate an intentionality of negation, or of promoting stigma.

In your reports it is striking that you mention “negation” as one posture you often encounter. You even call it “tantamount to criminal negligence”. Why those strong words?

When you gather data you realize everything that you have not been seeing. Let me give you an example: When we at the Interamerican Commission on Human Rights began the registry of violence we realized very quickly that data did not exist in relation to the killings of trans women and that’s because they typically were registered as men in the databases, so their gender identity was not recognized. That meant that there was no way to address the root causes which were deeply entrenched in their identity as trans women. There were a lot of factors that were needed to take into account when analysing why trans women were being killed. All of which was completely invisible to policy makers when they were invisible in data. This is why I call it “criminal negligence” because it is having such impact of damage in persons. 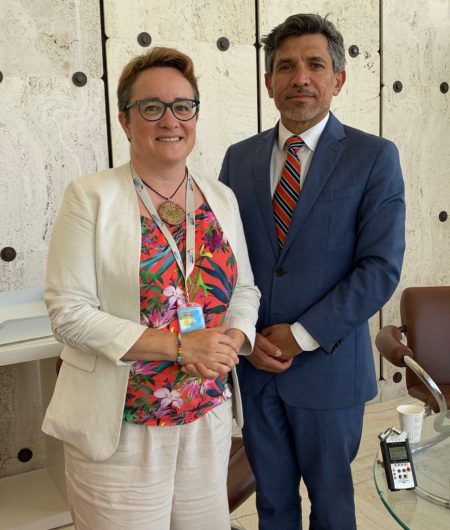 When you are meeting with state representatives, do you often face hostility? How do you navigate speaking with representatives of hostile countries?

First and foremost, its important to know that the mandate is inscribed within a strong institutionality within the United Nations. It means that I typically have only two types of situations: either the states which engage – maybe without a full coherence in the positions expressed by the mandate but by engagement you know that there is going to be dialogue. And then there are states that refuse to engage with the mandate. They become less and less, which is very nice. For the mandate, the rule is to keep all avenues open and to ensure that there is an understanding that what interests the mandate holder is to assist states that are interested in the people living within their jurisdiction not to get killed, not to get tortured, not to get named – and I believe that there is a great majority of the community of nations that actually have that objective. As long as states can see that that is the objective, I think we have a good chance that we will maintain dialogue.

What is most rewarding about being the Independent Expert on SOGI?

First, there is the intellectual challenge in the mandate, then there is an incredible reward in working with states that are actually interested in the topics of the mandate. Third, the idea continuing to work with civil society, which is the reason why this mandate exists, is very humbling and a wonderful source of inspiration. In all of my country visits civil society plays a fundamental role in ensuring that I have a firm anchor on what is happening on the ground. Forth, its the persons who are victims of human rights violations. Their stories are very emotional and touching. At the end of the day, we can all recognize ourselves in those stories. Each one of those stories evoke something on us, we all love somebody who is LGBTI and we all can relate to it.

Your mandate started in 2018 and will last until end of 2020, independently if the renewal of the mandate will be confirmed. What are your next plans and reports?

Thank you very much!

(This article was published on 2 July 2019 at the Heinrich-Boell Foundation Website.) 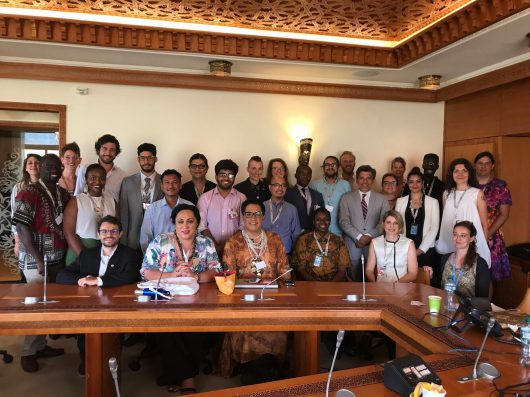 Group Picture with international LGBTIQ* activists and ILGA after a meeting with the Independent Expert at the UN Human Rights Council in Geneva in June 2019.