Browse: Home   /   Family diversity in Geneva – A side event on families and religion at the UN Human Rights Council 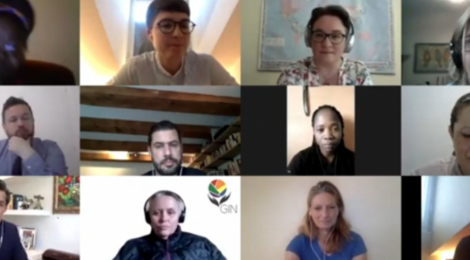 How can different types of families be better protected during and after the Covid-19 pandemic? Who decides what a family is, and (how) is religion being instrumentalised for this purpose? What obligations do UN member states have regarding family diversity? These are just some of the questions that civil society organizations discussed at a side event for the UN Human Rights Council.

“Our goals are to make family diversity more visible and to highlight the experience and reality of rainbow families in different regional, cultural and religious contexts,” says Maria von Känel, co-founder and board member of International Family Equality Day (IFED), a global network for family diversity.

“Throughout human history there have always been different models of family and community life,” adds Simon Petitjean from the Global Interfaith Network. “The UN system and its states have a responsibility to respect the human rights of all family members without distinction of any kind, and this is of particular importance in times of crisis when inequalities are heightened and reinforced.”

The two activists worked with COC Netherlands to organize the side event on “Recognition and Respect for Family Diversity in Times of Global Pandemic” at the 44th session of the Human Rights Council in late June 2020. Side events are an opportunity to discuss specific issues and interests in greater depth and appeal to UN delegations to adopt certain policies. This event was co-sponsored by the Permanent Missions to the UN of South Africa and the Swiss Confederation.

Numerous restrictions were placed on the 44th session of the UN Human Rights Council on account of the Covid-19 pandemic. For example, only one person from each country delegation could take part in the meetings, and the otherwise numerous side events that accompany the HRC on-site and are often organized by representatives of civil society had to be held online.

“All types of families need to be protected,” said Nelia Barnard, Deputy Permanent Representative for South Africa at the UN, in her opening statement. “The laws and policies related to Covid-19 need to be based on family realities,” reiterated Anita Bhatia, Deputy Director for UN Women. Bhatia appealed to government leaders to adapt their social protection programs to cover especially vulnerable groups such as LGBTIQ people who often have to be quarantined together with hostile family members.

The organizers of the side event seek to show how very problematic a traditional conservative definition of “family” can be, and to strengthen the coalition of states, civil society organizations and partners fostering broad support for family diversity. The very diverse program for this online event featured ten speakers, and more than ten representatives of UN Permanent Missions were among the over 80 registered participants.

“The data show that we exist”

Tuisina Ymania Brown, co-Secretary General of ILGA World, called upon people with an anti-LGBT agenda not to misuse religion to justify rejecting LGBTIQ individuals and non-binary conceptions of gender. “You accept everything created by God, but not anything that falls between your categories,” she said. A trans woman with two adopted sons – “they came not from my body but from my soul” who lives in Australia, she will be making every effort to overcome the rejection of family diversity and to advance the rights of different types of families. She urged UN member states to do the same.

Benny Ondongo from Kenya, an activist and non-binary parent, described life as a rainbow family in Africa. “Every day is a struggle, and many of us live in fear.” According to ILGA’s latest report on state-sponsored homophobia, Kenya is one of 70 countries that continue to criminalize homosexuality. Ondongo used the concept of ubuntu, meaning something like “I am because we are”, as an African form of self-image and sign of mutual support. The activist wants to see more research and documentation on family diversity, families with LGBTIQ parents, and rainbow families – “because the data show that we exist.”

Nontando Hadebe from the Circle of Concerned African Women Theologians called for reshaping theological discourse on families and LGBTIQ topics. At the Circle, women of all beliefs question patriarchal interpretations of sacred texts that foster gender inequality and male dominance. “We not only challenge these interpretations but also produce liberating alternative readings of sacred texts that promote the dignity and equal rights of women and LGBTIQ people.” Their work recovers voices of the oppressed who have been silenced by dominant theologians.

Dominic Johnson from the United Nations Children’s Fund (UNICEF) observed that social laws are often based on a traditional concept of family and therefore exclude family diversity from the start. “Countries are therefore violating the UN Convention on the Rights of the Child, which stipulates children’s right to protection regardless of the form their family takes,” said Johnson, and emphasized that “governments have the responsibility to protect every type of family.” He called for ending the debate over what constitutes a family and focusing instead on protecting children.

One of the last speakers at the 90-minute side event was Victor Madrigal-Borloz. An independent expert for the UN on protection against violence and discrimination based on sexual orientation and gender identity, he noted that families are viewed as “essential and natural” in various human rights documents such as the Universal Declaration of Human Rights (UDHR) and the International Covenant on Civil and Political Rights (ICCPR). At the same time there are reservations “that what we long for might not be natural.” He called upon activists to oppose that approach and show that the longing for families is human and needs to be recognized and respected. States’ definitions of family should not start with discrimination, nor should religion be misused for stigmatization and/or deeply violent narratives. On the contrary, hate-filled narratives need to be deconstructed. After all, they are not protected under international human rights legislation.

A successor event on religion during the Covid-19 pandemic is planned for the 45th session of the Human Rights Council in September 2020.

*Caroline Ausserer is a journalist, diversity trainer and moderator. She chaired the side event. For more than a decade she has been actively promoting LGBTIQ rights, e.g. on the board of the Network of European LGBTIQ* Families Associations (NELFA) and currently on the board of KomBi/QUEERFORMAT, a queer educational center. For more information: www.presspectives.net

This article is part of the project “International debates on human rights – Information and participation from an LGBTI perspective”.

The United Nations Human Rights Council (UNHRC) is a subsidiary body of the UN General Assembly and deals with the observance of human rights worldwide.

The members are elected by an absolute majority of the General Assembly for a period of up to three years. A maximum of two directly consecutive terms of office are permitted for a single state. In total, the Council consists of 47 members, who come from the various regional groups according to a regional distribution key. Germany, the Netherlands and Poland are the European countries currently represented until 2022.
The Human Rights Council holds no less than three regular sessions per year, which last at least ten weeks in total. They take place in March (four weeks), June (three weeks) and September (three weeks). The sessions of the Council are transmitted live via webcam.
Civil society can actively participate in the meetings if it has consultative status, which must be requested from the Social and Economic Committee ECOSOC. More information on the consultative status hier. At present 4045 NGOs have ECOSOC status. LSVD is one of them.
NGO Participation in the Human Rights Council