Results of the voting for the #IESOGI at the UN Human Rights Council in July 2019, all rights reserved.
[entry-title permalink="0"]
[entry-published] · in [entry-terms taxonomy="category" before=""] [entry-edit-link before=" · "]

Worldwide, people are being subjected to serious human rights violations because of their sexual orientation and gender identity (SOGI). To address this, the UN Human Rights Council (HRC) created a new UN special procedure in 2016. In a close vote, a slim majority decided on appointing an Independent Expert (IE) on protection against violence and discrimination based on sexual orientation and gender identity. On July 12th 2019, at the 41st session of the HRC, a more substantial majority voted the mandate to be extended

by Caroline Ausserer (Published on July 2019 at the Heinrich-Böll Website, Link)

The decision was made after a heated discussion – 27 members of the UN HRC voted for, while 12 members voted against the Resolution extending the mandate for another three years. Seven member states abstained from voting. Prior to the vote, the Resolution was backed by 54 countries and supported by 1,312 NGOs from 174 countries around the world.

“We need this mandate because people are being killed, tortured and ridiculed because of their sexual orientation and gender identity. We cannot ignore this fact!,” says the Argentinian delegate to the UN. She was also a member of the core group that drove forth the mandate at the deliberations regarding the Resolution in the Human Rights Council.  The Resolution for the extension of the mandate was submitted by a core group of seven Latin American countries – Argentina, Brazil, Chile, Colombia, Costa Rica, Mexico and Uruguay.

Member states of the Organisation for Islamic Cooperation (OIC) are particularly opposed to the mandate, with the exception of Albania and Tunisia. Egypt, Bangladesh, Qatar, Nigeria, Pakistan and Saudi Arabia explicitly disputed the legitimacy of the mandate. Along with Afghanistan, Bahrain, China, Eritrea, Iraq and Somalia, these were the 12 countries who voted against the extension.

Together, these countries submitted ten amendments. The opposing countries criticized that religious, cultural, political and economic peculiarities of the countries were not taken into account, that the mandate interferes with national affairs, that a new category of allegedly vulnerable individuals is being created and that the terms “sexual orientation” and “gender identity” have no basis in international human rights legislation and that therefore this resolution undermines the work of the UN Human Rights Council.

An absence of a joint European position

“We can see nuances in government positions that did not exist three years ago, as for example with Pakistan,” says André du Plessis, managing director of ILGA, the global umbrella organisation for LGBTI rights. Pakistan was critical of the SOGI formulation, but at the same time conceded to agree to a mandate that confines itself to gender identity only. „That is a huge improvement!“ commented du Plessis. However, with the rise of nationalist, populist movements in Europe, North and Latin America and Asia, the political changes are such that „places in which we thought we could trust, we no longer can. “ As far as Europe is concerned, du Plessis deplored Hungary’s stepping out of line which brought on a lack of a joint European position.

Not an artificially created issue

“The resolution does not call on states to take a moral position on this issue. It is about rejecting human rights violations” emphasized the Argentinian delegate from core group at the crucial debate. The accusation that SOGI is an artificially created issue seeking to give privileges to a particular group was rebutted by many countries.

“This is about the reality many people live in,” emphasized the delegate from South Africa. The Council must be a defender of all vulnerable persons. The Australian delegate followed suite: “The mandate seeks to provide information on the experience of violence and discrimination based on SOGI and to develop protective measures.”

A statement by the EU presented by Denmark, also deplored that “sexual orientation and gender identity continue to be used to justify serious human rights violations.” Time after time, throughout the debate, reference was made to the Universal Declaration of Human Rights, which contains the obligation to protect all people, including LGBT persons. Cultural or religious specificities of states should never justify violence and discrimination based on SOGI. “We are talking about existing rights that should be respected by all states,” said the delegate from the United Kingdom. It is now a matter of creating a world in which this mandate is no longer needed.

Violence and discrimination must stop

To date, 69 countries are still criminalizing consensual sexual acts between members of the same sex. A total of 2982 trans and gender-diverse people were reported killed in 72 countries between January 2008 and September 2018. In all regions of the world, people are exposed to violence and discrimination because of their sexual orientation and gender identity, especially in relation to accessing health care, housing, work and education.

“Daily discrimination and violence have meanwhile become part of our lives. This is affecting our mental health, endangering our bodily integrity and challenging our self-esteem time and again”, says Paula Marina Sebastião, an activist from Angola who travelled to the UN Human Rights Council session. For her, the mandate is too important to change.

“The mandate holder is our megaphone because he listens to our stories and realities and translates them into language the member states understand and can rely on”, says Micah Grzywnowicz of the Swedish LGBT organisation RFSL – „This is the first time the UN as a whole deals with the realities our communities are faced with.”

The significance of the IE’s mandate for LGBT activism worldwide is also illustrated by Arvind Narrain from the global LGBT organization ARC International: “The mandate is a new mechanism activists around the world can use to push their local struggles forward. As such, it is a very important tool of national, regional and international activism.”

The current mandate holder, Victor Madrigal-Borloz visited numerous countries during his tenure, sought constructive dialogues with states and interest groups from all regions, identified best practices and supported states in fulfilling their international human rights obligations in this field. The mandate falls under the so-called Special Procedures of the United Nations, which are among the most effective international instruments for combating human rights violations. With the confirmed three-year extension, the mandate has reached the phase of consolidation. 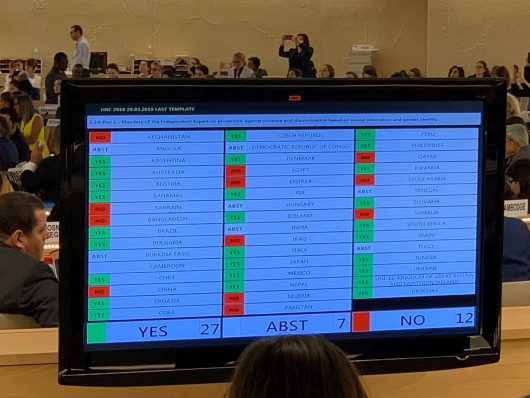 Results of the voting for the #IESOGI at the UN Human Rights Council in July 2019, all rights reserved.

Reading of the joint statement of 1,300 NGOs at the HRC: (Video)

Interview with the mandate holder: